Visitors 51
Modified 15-Feb-09
Created 15-Feb-09
6 photos
I visited the Philadelphia Phillies' Spring Training Camp in Clearwater, Florida on Feburary 15th. For some reason, the Phillies have made it virtually impossible for photography.

Much of the area is double-fenced. Although I would stand a chance shooting through just one fence, they have now placed netting about five feet in front of the cyclone fencing! Fortunately, there was a small opening through one of the dugout fences from which I was able to capture a few images...all from the same angle.

A little boy (pictured last in the series) had his heart set on getting a baseball. During batting practice, several balls landed on the rightfield warning track. Many times, players would toss the balls over the fence to the kids.

This boy wasn't able to yell loud enough to get the attention of any of the players. But, one of the club's employees was standing next to me and the boy. At the end of the practice, there was just one baseball left and it was sitting maybe 15 feet from the boy. The fence was open at that point, so the boy kept trying to walk out to pick up the ball...but the employee kept reminding him to stay behind the fence.

Finally, to the delight of the boy, the employee walked out to get the baseball. He picked up the ball, but I was surprised to see him toss it about 50 feet further onto the field! The little boy just walked away.

The only saving grace was that the Phillies' manager, Charlie Manuel, took time out to talk with the fans and sign quite a few autographs. 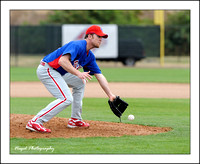 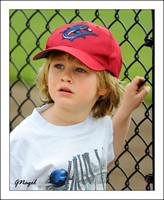