Earlier this week, I captured a series of photographs of a female orangutan at the Brookfield Zoo. Although this animal is housed in an indoor exhibit, the light streaming in from the skylight of Tropic World was a little harsh and introduced more contrast into the picture than I wanted.

Then, I added some fill flash (TTL -1EV) using my Nikon SB-900 speedlight along with the Better Beamer. The flash allowed me to increase my shutter speed slightly (to 1/50th) and to reduce my ISO by one stop (to 400). Additionally, fill flash reduced the contrast within the frame by filling in the shadows. This allows for more detail--particularly in her hands and the fur along her shoulder: 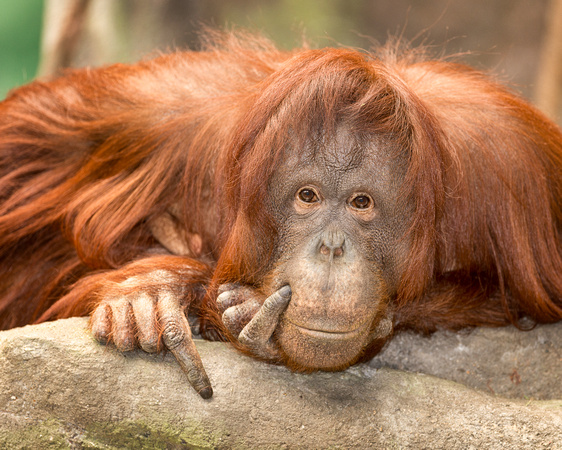 Of course, the amount of contrast desired in the photograph is a matter of personal taste. I happen to prefer the second image. One method of increasing the contrast is to reduce the amount of fill flash. Or, I can always increase the contrast while processing the photograph. Reducing contrast during post processing is a much more difficult task than increasing contrast. So, having the second image as a starting point provides me with much more flexibility during post processing.