Too Time Consuming for Symmetry

During my last trip to Des Moines, I revisited the Iowa State Capitol. The law library inside the capitol building is one of the more impressive interior spaces that I have seen. I was fortunate to have the library to myself for the better part of an hour.

The library was challenging to photograph. Harsh sunlight was shining through the windows. The sunlight not only made it difficult from a color perspective due to the mixed lighting sources (daylight vs. the warmer light from the chandeliers), but it also made balancing the exposure a challenge. I converted the picture to black and white in part due to the color issues. 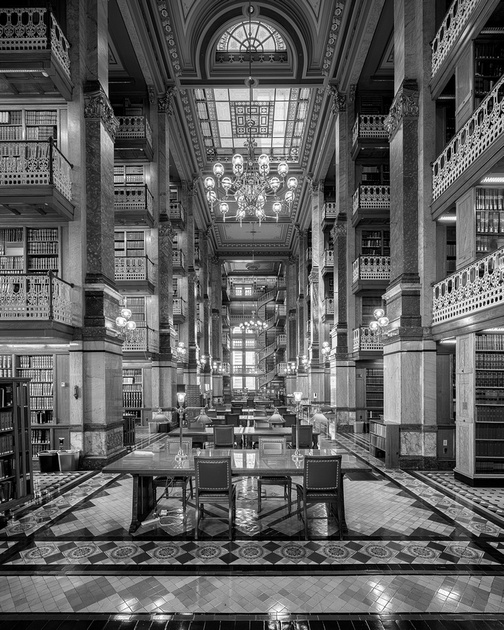 I pay attention to symmetry in my photographs. No matter how carefully tried to align things, the picture continued to look unbalanced. The reason for this is that the tables were not centered on the floor. Notice how the tables are positioned such that they align with the second set of diamond tiles on the left, but the third set of diamond tiles on the right. If I were able to move the tables to the right, I could have aligned the tables with the chandeliers. But this was not to be. As I tried moving the first table, I quickly noticed that the weight was going to make this process a big effort. There are a lot of tables--and before long I would have attracted the attention of the librarian. The tables make a lot of noise when they slide on the tile. I had already moved some trash cans from the scene (although I missed some on the left).

So, I ended up shooting the scene as is. I like it, but not as much as if I had moved all the tables!