During my last road trip, I visited the Heinz Memorial Chapel on the campus of the University of Pittsburgh. This is a very popular tourist destination, so it's not easy to photograph the interior without large crowds.

I thought that I might only have the interior of the chapel to myself for a few minutes, so I worked very quickly. After about 20 more minutes the attendant asked me if I wanted to get some shots from the balcony. The balcony was closed off to the the general public, but with his permission I captured images from this more advantageous viewpoint. During the time, I still had this incredible chapel to myself!

Once I had captured my last picture from the balcony, a large group of visitors entered the chapel. From then on, it was crowded with people.

I returned the next morning when the chapel opened. This time, a different attendant was on duty. As I went to set up a picture from the floor level, she began questioning me about why I was taking pictures. Access to the balcony was not an option. It was clear that photography during my return trip wasn't going to be nearly the favorable experience that it was during my visit the previous day.

So, it can sometimes pay off to visit a location more than once. And, I was very fortunate to be able to capture photographs of this magnificent cathedral during my visit to Pittsburgh. 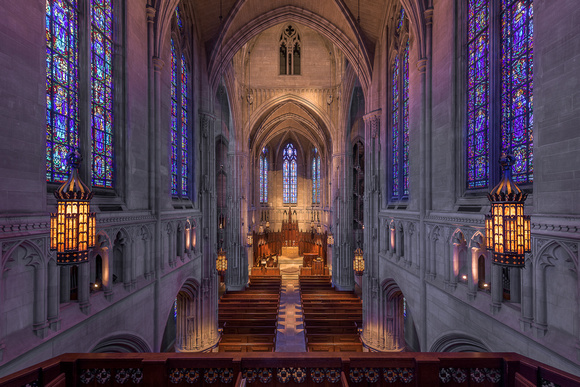